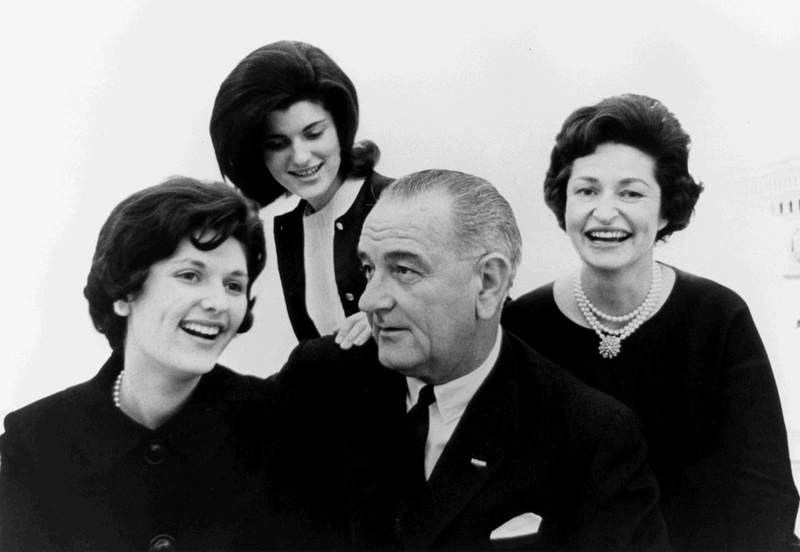 Claudia Alta Taylor was born in Karnack, Texas on December 22, 1912. Her father was Thomas Jefferson Taylor, owner of a general store who declared himself "dealer in everything." Her mother, Minnie Pattillo Taylor, died when the little girl was just five-years old. She had two older brothers, Tommy and Tony. After her mother's death, Lady Bird's "Aunt Effie" Pattillo moved to Karnack to look after her. At an early age, a nursemaid said Claudia was "as purty as a lady bird" — thereafter she became known to her family and friends as "Lady Bird." She grew up in the "Brick House" and attended a small rural elementary school in Harrison County, Texas. After graduating from Marshall High School in 1928, she attended Saint Mary's Episcopal School for Girls in Dallas from 1928 to 1930. Lady Bird Taylor entered the University of Texas in 1930 and received a Bachelor of Arts degree in 1933 with a major in history. In 1934 she earned a journalism degree.
After a whirlwind courtship, Claudia Alta Taylor and Lyndon Baines Johnson were married on November 17, 1934 at Saint Mark's Episcopal Church in San Antonio, Texas. Two daughters were born to the Johnsons: Lynda Bird Johnson (1944) (Mrs. Charles S. Robb) resides in Virginia; and Luci Baines Johnson (1947) (married to Ian Turpin) lives in Austin, Texas. Mrs. Johnson had seven grandchildren—one boy and six girls—and eleven great-grandchildren.
Lady Bird Johnson was the author of A White House Diary, a record of her activities which she kept during the years her husband served as the 36th President of the United States. During her White House years, she served as honorary chairman of the National Head Start Program, a program for underprivileged pre-school children which prepares them to take their places in the classroom on a par with their peers. Throughout her life, she supported and was very interested in the activities of the LBJ Library and the Lyndon B. Johnson School of Public Affairs, both located on The University of Texas campus in Austin. In January, 1971, Mrs. Johnson was appointed to a six-year term as a member of The University of Texas System Board of Regents. She was a life member of The University of Texas Ex-Student Association, and was a member of the International Conference Steering Committee (1981-82) and The University of Texas Centennial Commission.
First and foremost, Lady Bird Johnson was an environmentalist, and she was an active worker on innumerable projects. In Washington, she enlisted the aid of friends to plant thousands of tulips and daffodils which still delight visitors to our nation's Capital. The Highway Beautification Act of 1965 was the result of her national campaign for beautification. Lady Bird was honorary chairman of the LBJ Memorial Grove on the Potomac in Washington, D. C. She also chaired the Town Lake Beautification Project, a community effort to create a hike and bike trail and to plant flowering trees along the Colorado River in Austin, Texas. She became a member of the National Park Service's Advisory Board on National Parks, Historic Sites, Buildings and Monuments in 1969 and served on the council for many years. She was a trustee of the American Conservation Association.
On her 70th birthday in 1982, Lady Bird founded the National Wildflower Research Center, a non-profit environmental organization dedicated to the preservation and re-establishment of native plants in natural and planned landscapes. She donated 60 acres of land and a sum of money to establish the Center which serves as a clearing house of information for people all over the country. She realized her long-held dream in 1995 when the Center moved into its new and larger facility. In December, 1997, the Center was renamed the Lady Bird Johnson Wildflower Center in honor of Mrs. Johnson's 85th birthday. She was chairman of the Wildflower Center's board of directors until her death.
In December 1972, President and Mrs. Johnson gave the LBJ Ranch house and surrounding property to the people of the United States as a national historic site, retaining a life estate in the Ranch. Mrs. Johnson continued to live there until her death in Austin, Texas on July 11, 2007 at the age of 94. She is buried beside her husband in the family cemetery at the LBJ Ranch in Stonewall, Texas.